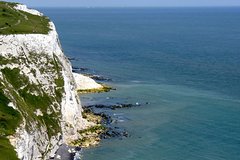 Start the excursion with a visit to the renowned Battle of Britain Museum located on the site of the aerodrome from where Spitfires and Hurricanes took off during the Battle of Britain. Continue via the Edwardian seaside resort of Folkestone, where we drive along the Leas promenade to the historic harbour, from where soldiers left in the Great War for the Western Front. Next visit the poignant Battle of Britain Memorial at Capel-Le-Ferne. Passing through Dover overlooked by its imposing Norman Castle, we soon reach picturesque St Margaret's Bay nestled underneath the spectacular White Cliffs of Dover. To complete the experience, enjoy an included traditional 'cream tea' in a typical English tearoom, where we also find a fascinating museum dedicated to WW2.ItineraryThis is a typical itinerary for this productStop At: Battle of Britain Memorial, New Dover Road Folkestone, Capel-le-Ferne CT18 7JJ EnglandA moving monument to the aircrew who flew in the Battle of Britain opened by the Queen Mother in 1993Duration: 30 minutesStop At: Kent Battle of Britain Museum, Aerodrome Road, Hawkinge, Folkestone CT18 7AG EnglandThe world's largest collection of Battle of Britain memorabilia Duration: 1 hourStop At: St Margaret's Bay Beach, Bay Hill, St Margaret's Bay, Dover CT15 6DX EnglandExcellent photo opportunities with views of the White Cliffs of Dover from below. We include a stop for a home made Cream Tea at a local tearoom, which also features a small museum on WW2 and the famous people who lived in the areaDuration: 1 hourStop At: The Leas Promenade, Leas Cliff Hall The Leas, Folkestone CT20 2DZ EnglandDrive along the beautiful Leas Promenade and learn about Folkestone's role in World War 1. Continue down Spitfire Way to the Harbour Arm from where thousands of troops left for the Western FrontDuration: 10 minutes 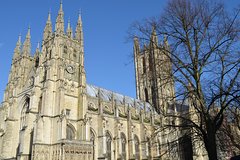 Private Day Trip to Canterbury and Leeds Castle from Canterbury

This private day trip organized just for you and your party will take you to the charming UNESCO Heritage City of Canterbury and historic Leeds Castle. Transportation will be provided in a modern air-conditioned 7-seater vehicle with the services of a fully qualified driver-guide.This private excursion may start in Ashford (Kent), Folkestone or Dover and you may choose the preferred start time that suits you best. Participants travelling by High Speed train from London St Pancras will be met at Ashford International station. Those arriving by ferry or cruise ship may be picked up and returned to the Port of Dover at no extra charge. The duration of the excursion is between 4 to 5 hours, depending on how long the participants wish to spend at the stops.Enjoy a private walking tour through the historic main streets and hidden lanes of Canterbury, a UNESCO World Heritage Site. The highlight is without doubt the breath taking Cathedral, the mother church of the Anglican community. Driving west along the Stour Valley you pause in Chilham, a gem of a village that has featured in many period films. Time permitting, you may stop for a drink or even lunch in one of the splendid public houses that the village has to offer (own expense).The second part of the excursion takes you to Leeds Castle, quite rightly dubbed 'The Loveliest Castle in the World' (entrance ticket at own expense). Boasting over 1000 years of history, it was once the property of six of England's Queens and was used by Henry VIII and his 1st wife, Catherine of Aragon. The Castle itself rises dramatically from the waters of its moat and is surrounded by 500 acres of stunning parkland. Throughout history, it has been a palace to entertain and impress with every generation leaving its mark.At the end of the tour, you will be taken back to a location of your choice in either Canterbury, Ashford, Folkestone or Dover.